My ideas come from the streets. —Arturo Vega

Howl! Happening is delighted to announce Empire: An Arturo Vega Retrospective—originally curated by Jade Dellinger for the Bob Rauschenberg Gallery of Florida SouthWestern State College—opening in New York with a public reception on March 23, 2017 at 6 PM. This ambitious survey runs through April 20 and will include guest lectures, performances and a panel discussion exploring Arturo Vega’s broader impact on popular culture while contextualizing his work as a visual artist.

Howl! Happening was established to honor Vega, his life and work, and his support for East Village artists, and we are particularly proud to be the second stop for the late Mexican-born artist’s U.S. museum retrospective. The exhibition features photography, collage and a number of iconic canvases from the artist’s Supermarket and Silver Dollar series (begun in the 70s); his Flags and so-called “word paintings” from Insults; and other series produced during the 80s, 90s and aughts. Of special note is his last major work, Life isn’t tragic, love is just being ignored, a mural commissioned in 2013 that hung on the corner of Prince and Elizabeth streets.

It is particularly fitting that the Empire retrospective should be initiated by the Bob Rauschenberg Gallery, as Dellinger notes their inspirational parallels. For although the two artists may never have met, he says in his catalog introduction, “Vega and Rauschenberg understood that art had the power to permeate borders and bring revolutionary change. They were born and raised on opposite sides of the Tex-Mex divide, but were citizens of the world with global ambition to engage in a dialogue about the sociopolitical, humanitarian and monetary impact of nations.”

Escaping the repressive violence of an authoritarian regime under Mexico’s “perfect dictatorship” in the late 60s, Arturo Vega made his way to New York City to study English, philosophy, and photography at the New School for Social Research in the early 70s. Having discovered Elvis as a child and later co-directing a touring production of The Who’s Tommy at the National University in Mexico City, Vega understood the revolutionary and transformative power of music, theatre/performance and art.

While working on his first painting series of supermarket signs, he befriended members of the Ramones, a rock and roll band that would soon play their first show (and would decades later be inducted into the Rock and Roll Hall of Fame). Designing the Ramones’ ubiquitous logo based on the Great Seal of the United States, painting backdrops for their stage, and creating a lighting scheme loosely adapted from Albert Speer’s Lichtdom to enhance their effect, Vega created visual imagery that defined the transgressive aesthetic of punk rock by co-opting and questioning symbols of power.

As Vega once said: “Art connects to the eternal—demanding fast changes and a reckless appetite for truth, justice and a better way of life.” Empire: An Arturo Vega Retrospective, which premiered at the Bob Rauschenberg Gallery, draws parallels and explores interests shared by Arturo Vega, our gallery namesake. For Rauschenberg, “(Art was) a means to function thoroughly and passionately in a world that has a lot more to it than paint.”

Concurrent with the exhibition, curators, critics, and dear friends deepen understanding of his life and work, including a penetrating look at the cultural and political climate in Mexico that nurtured the visual and conceptual framework played out in the studio paintings featured in Empire and his work with the Ramones.

Arturo Vega’s Art and Life with the Ramones
A presentation by Sandra Schulman and Monte A. Melnick 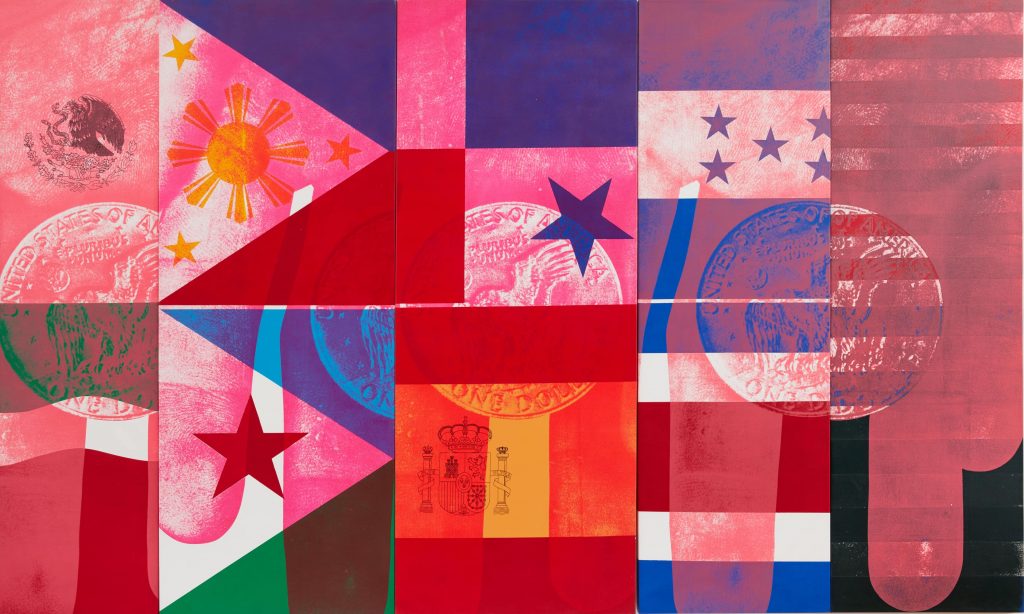