An Evening of Readings and Performances with Friends and Colleagues

Murrin, who performed for many years as Alien Comic, cast his spell on generations of East Village artists and pioneering a brash, hilarious, and prop filled tradition of performance art. The works written and performed on this evening form the basis for a book-in-progress on Murrin written by his wife, Patricia Sullivan. Come prepared for an evening of laughter, history, and inspiration!

About the Performers
David Cote is an arts reporter, playwright and opera librettist. He covers theater and other things at The Village Voice, What Should We Do and American Theatre.

Erin Courtney‘s Obie award winning play A Map of Virtue, produced by 13P and directed by Ken Rus Schmoll, was described by the New York Times as “one of the most terrifying plays of the past decade”. Her other plays include I Will Be Gone, Alice the Magnet and Demon Baby. She teaches playwriting at Brooklyn College.

Katie Hathaway is an interdisciplinary artist based in New York City. Her plays and musicals have been performed and developed at Ars Nova, Yale Institute for Music Theater, The Johnny Mercer Songwriters Project, The Flea Theater, New Dramatists, The Bushwick Starr, Dixon Place, Joe’s Pub, and the BMI Musical Theatre Workshop. She is a MacDowell Colony fellow, an alumni of Barnard College and has an MFA in playwriting from Brooklyn College. She sunlights as a music teacher at St. Ann’s School.

John Jesurun is a playwright/director/media artist. Since 1982 text, direction, design for over 40 pieces including Chang in a Void Moon, Philoktetes and Shatterhand Massacree. “Distant Observer” his collaboration with Takeshi Kawamura premieres at La Mama March 16. Webserial “Shadowland” on Vimeo.

David Levine is an artist and OBIE-winning theater director. As David Soul, he collaborated with Tom Murrin (as Jack Bump) on five increasingly lurid dramas. His exhibition Some of the People, None of the Time will open at the Brooklyn Museum in May.

Salley May is a NYC-based performance artist since 1987, a long-time curator of Performance Space 122’s Avant-Garde-Arama series, and a teaching artist of theater workshops with mentally disabled populations.  She ran the HOWL Happening Gallery Tom Murrin Full Moon show series with Tony Stinkmetal, and is cofounder of MAYHEM company with her sister Nancy May perry.  She remains committed to the work and spirit of Tom Murrin/Alien Comic.

Nicky Paraiso is a Director of Programming at La MaMa and the Curator for the La MaMa Moves! Dance Festival. He is an accomplished actor and singer and was recently awarded a 2018 TCG Fox Actor Fellowship.

Lucy Sexton is half of the dance performance duo DANCENOISE, director of Tom Murrin’s one-man show, and performs solo as The Factress.

Patricia Sullivan, Tom Murrin’s widow, is a photographer whose work has been exhibited in NY and LA and published in Time Out NY, New York magazine, and Paper. She is working on a book about Tom Murrin.

About Tom Murrin and the Tom Murrin Archive
Howl! Happening is the repository of the Tom Murrin Archive comprising masks, costumes, scripts, correspondence, photographs, and tapes of performances going back to the early 70s. Murrin (February 8, 1939 – March 12, 2012) also known as The Alien Comic and Jack Bump, was a performance pioneer whose life and work inspired both artists and audiences for over 40 years. He was a member of the first generation of La MaMa playwrights. Tom wrote four plays performed through La MaMa and produced by John Vacarro’s Play-House of the Ridiculous, including the offbeat hit, Cock Strong, which toured with Ellen Stewart’s La MaMa Troupe to Paris, Amsterdam and Brussels.

Under the guidance of famed rock manager Jane Friedman, Tom began to perform under the name Alien Comic, opening for acclaimed punk bands in rock clubs such as CBGBs and Max’s Kansas City. He performed in New York City clubs and theaters as The Alien Comic, appearing in such venues as The Pyramid, 8BC, King Tut’s Wah Wah Hut, Performance Space 122, Dixon Place, La MaMa, and more. Since the mid 80s, he created, performed, and curated a series of variety nights at Performance Space 122, and later at the La Mama Experimental Theatre Club and Dixon Place, called The Full Moon Show. His plays Sport-Fuckers and Butt-Crack Bingo were produced at Theater for the New City and La MaMa and directed by David Levine. Tom was the first performance artist to appear on stage at the original Dixon Place location at 37 East First Street in 1986. 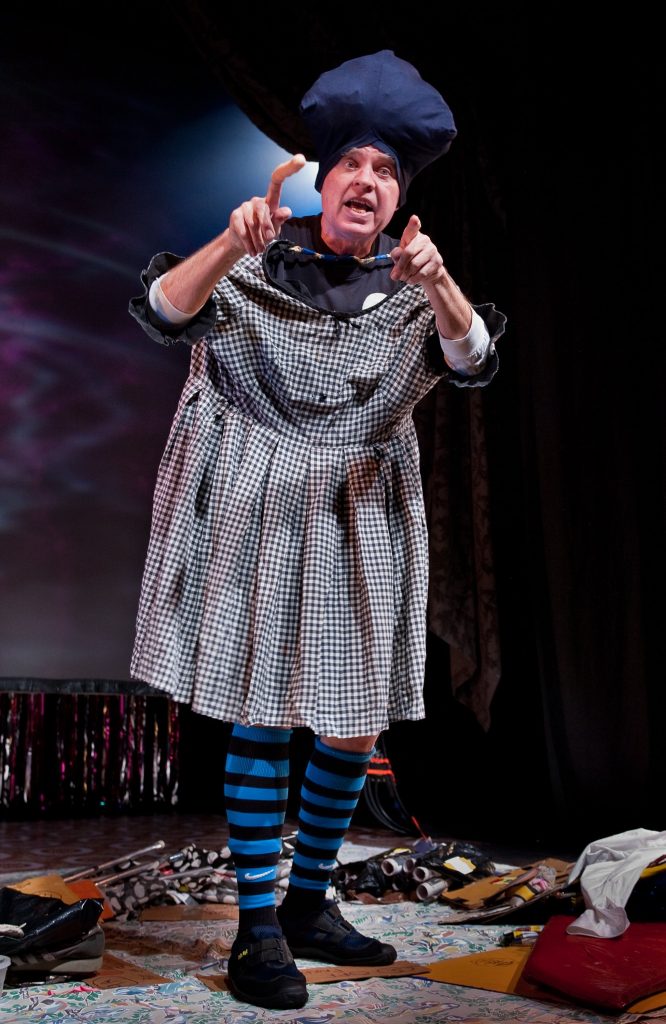