Every Month on The Full Moon
4pm Sharp

Howl! Happening houses the archives of the late Tom Murrin. Murrin, aka the Alien Comic, is known as the Godfather of Performance Art. Every full moon, Tom performed the Full Moon Show in honor of his moon goddess, Luna Macaroona. When he had a club date that fell on the full moon, he’d wrangle his friends to perform as his guests—pushing the careers of such groundbreaking performers as David Cale, David Sedaris, Amy Sedaris, Blue Man Group, Ethyl Eichelberger, Lisa Kron and many others. When dateless and unbooked, he’d perform on the street for passersby, transforming the pedestrian atmosphere with his madness and magic. Howl! Happening’s monthly series continues that tradition, with performances in the gallery and surprise pop up performances on the street.

Howl! Happening is the repository of the Tom Murrin Archive comprising masks, costumes, scripts, correspondence, photographs, and tapes of performances going back to the early 70s. Murrin (February 8, 1939 – March 12, 2012) also known as The Alien Comic and Jack Bump, was a performance pioneer whose life and work inspired both artists and audiences for over 40 years. He was a member of the first generation of La MaMa playwrights. Tom wrote four plays performed through La MaMa and produced by John Vacarro’s Playhouse of the Ridiculous, including the offbeat hit, Cock Strong, which toured with Ellen Stewart’s La MaMa Troupe to Paris, Amsterdam and Brussels.

Tom began to perform under the name Alien Comic, opening for acclaimed punk bands in rock clubs such as CBGBs and Max’s Kansas City. As Alien Comic he performed in such venues as The Pyramid, 8BC, King Tut’s Wah Wah Hut, Performance Space 122, Dixon Place, La MaMa, and more. From the mid 80’s on, he created, performed, and curated a series of variety nights at Performance Space 122, La Mama Experimental Theatre Club and Dixon Place, called The Full Moon Show. His plays Sport-Fuckers and Butt-Crack Bingo were produced at Theater for the New City and La MaMa and directed by David Levine. Tom was the first performance artist to appear on stage at the original Dixon Place location at 37 East First Street in 1986. 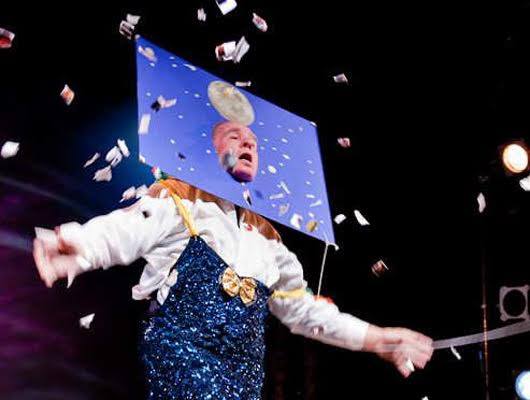