Readings from Fracktured Lives and Your House is Mine

Readings from Fracktured Lives and Your House is Mine

Your House is Mine, edited by Castrucci and Nadia Coen, is an oversized artist book with 33 signed silk-screen prints. A collection of images and texts defining and expressing the broad and essential issue of housing on the Lower East Side, the work as a whole creates a statement about the force of “art as a means of resistance.” The book is critical of the status quo. Provoking or inciting the public, it offers objective statements or alternative solutions to authoritative city planning.

An amazing array of groundbreaking artists worked with Castrucci to make silk screens for the book, including David Wojnarowicz, Martin Wong, Lady Pink, and Lee Quiñones. From each silk screen, 150 prints were made to be wheat-pasted on city walls, and 150 were printed on 50-pound Mohawk vellum for Your House is Mine, which was designed by Castrucci, his brother Paul, and Coen. The book also presents contributions from figures like Miguel Algarín, Chris Burden, Martha Cooper, Daze, John Farris, Allen Ginsberg, David Hammons, Hettie Jones, Cookie Mueller, Public Enemy, Adam Purple, Bimbo Rivas, and Andrés Serrano.

Fracktured Lives is a massive 25-pound book, bound in sheet metal, which comprehensively takes on the subject of fracking. The project was created to protest and ultimately ban this polluting practice that forcibly extracts natural gas.

Deploying a range of aesthetics between high and lowbrow art forms, the posters and the ideas behind them were collectively brainstormed and came to fruition at the School of Visual Arts in New York City, where Castrucci and his students started the Dirty Graphics collective. 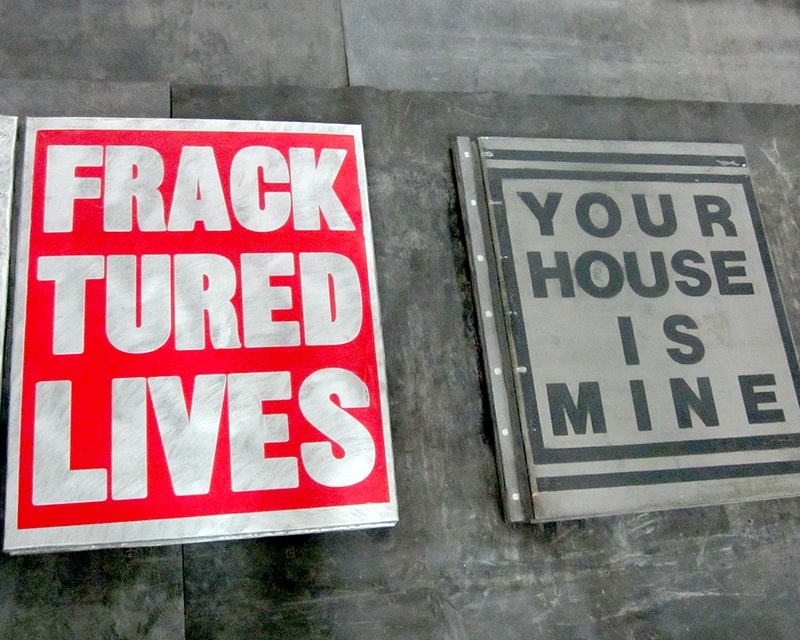