In this previewed excerpt, critic Carlo McCormick discusses the themes and allusions in the new works by Scooter LaForge on show at Howl! Happening until March 13th 2019.

The exhibition catalogue for Scooter LaForge: Homo Eruptus will be available soon. Check for updates on our social media and weekly emails for the announcement of the catalogue launch evening.

In a kind of post-modern marvel of time in a blender remix pastiche, Scooter doesn’t simply deliver the engulfed and exhumed subterranean splendor of Pompeii but the great homosexual underground clubs that raged through the city of his youth, the demise of the former conjoined in some anonymous sexual tryst with the latter. Born of post-Stonewall liberation, fueled on Amyl Nitrate, clad in leather and lubed for pleasure, the lost landmarks of gay’s golden age- The Anvil, The Mineshaft, The Ramrod, The Cockring, The Toilet, The Glory Hole and Crisco Disco- operated as open secrets serving a subculture for years with relative impunity at a time when straight culture was simply too scared and clueless to fathom the erotic transactional nature of sex clubs. That vanished topography of clubs, trucks, piers, brambles and baths where sex, fetish and identity were forged anew constitutes its own mythology of demi-worlds in ruins, blighted in retrospect by an almost medieval plague and yet shining with the glamorous patina of a paradisiacal innocence and freedom perhaps forever lost.

Executed to a scale and with a painterly bravura that recalls the narrative tropes of the muralist tradition, Scooter LaForge’s Pompeian elegy is a tragicomedy of visceral intensity and poetic contemplation, a romantic farce of Eros and Thanatos flirting and fornicating in a doomed affair of desire and desperation. It’s about lust and its delusions of love, the recusals of caring too much and the refusals of not caring enough. Amidst his rich referentiality of these paintings, winks to histories personal and collective at once allusory and illusory, there are the horsed figures taken from Fellini’s Satyricon, based off the fragmented proto-novel of the same name that was written by Petronius that featured Pompeii not long before its centuries-long absence from our cultural memory. An outrageous story and hilarious satire to begin with, made all the more compelling in its mystery for the fact that much of it has been lost, Petronius’ classic is filled with homosexual longing and heterosexual impotence, a throaty vulgarity that is transgressive still and the first known literary reference to cannibalism among its many taboos. Fellini’s version, a more direct influence on LaForge here, is just as ribald and decadent (as Pompeii has now forever come to connote for us), but even more surreal and disjointed as the director used the numerous narrative lapses constituted by the missing texts to insert his own speculative story-telling fantasies. 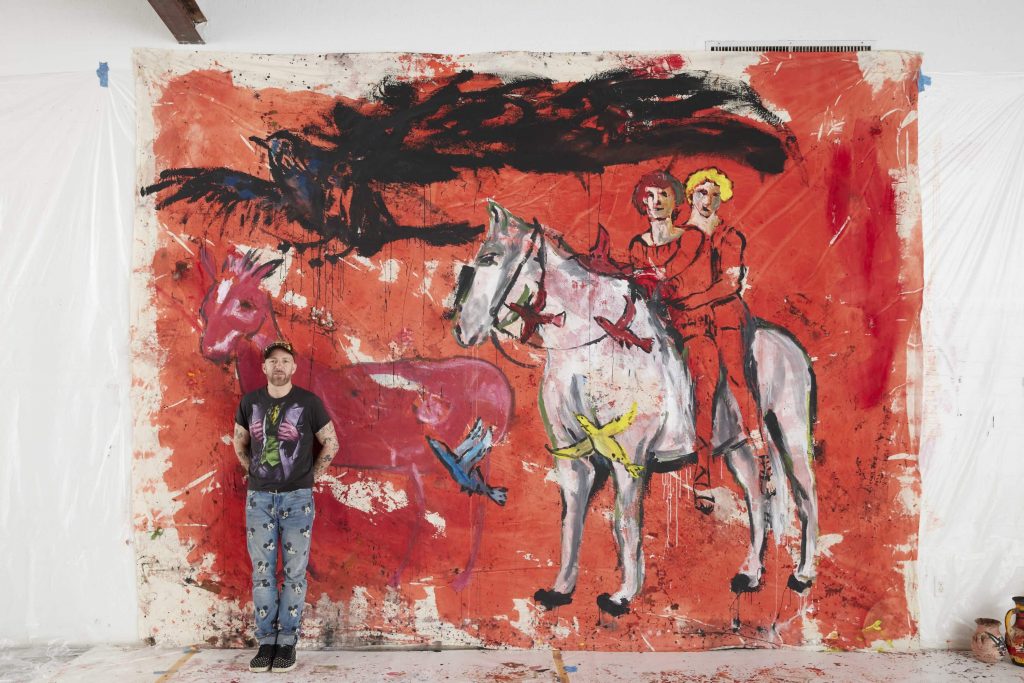 Image: Federico Will You Be My Girlfriend? by Scooter LaForge