For Spring/Break, Howl! is also pleased to offer the Mount Vesuvius Fire Sale, curated by Carlo McCormick, featuring works by Scooter LaForge. Inspired by his painting exhibition Homo Eruptus Mount Vesuvius will include amphora, paintings and works associated with his show at Howl! Happening– up through March 13th.

“Mount Vesuvius Fire Sale is a perfect manifestation of the subversive humor and social commentary inherent in both Carlo’s and Scooter’s work,” says Jane Friedman, executive director of Howl! Happening. “These 21st century souvenirs are satirical, but the cloud hanging over all of us is dead serious in these troubling times.”

Commenting on LaForge’s exhibition, Homo Eruptus, currently on view at Howl! Happening through March 13th, McCormick begins his catalog essay by quoting a passage from Malcolm Lowry’s novel Under the Volcano: “I have no house, only a shadow. But whenever you are in need of a shadow, my shadow is yours.”

Carlo goes on to say:

Ashes to ashes, funk to funky, we all live under a volcano, in the shadows of a doubt. What is certain is only that we will each of us someday die; the only remaining mortal question is if it will be with a bang or a whimper. In an ambitious cycle of new paintings Scooter LaForge allows us the pleasure and peril of contemplating life in the shadows of extinction, reimagining the frescoes of Pompeii through the bacchanal of another abruptly interrupted era: that of New York’s pre-AIDS gay nightlife. […] In a kind of postmodern marvel of time in a blender remix pastiche, Scooter doesn’t simply deliver the engulfed and exhumed subterranean splendor of Pompeii but the great homosexual underground clubs that raged through the city of his youth, the demise of the former conjoined in some anonymous sexual tryst with the latter.

Mount Vesuvius Fire Sale offers the chance to own a piece of history in the making, as LaForge creates and memorializes historic remnants of a long-buried creative culture.

For information about Spring Break 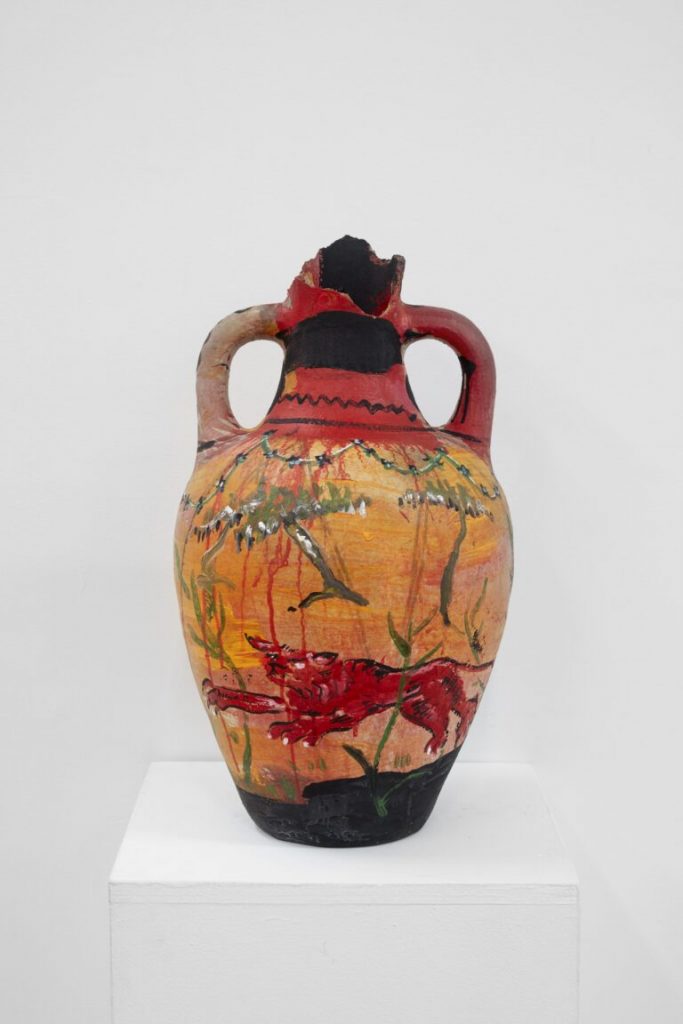