Chris Tanner: Here’s Looking at You

Chris Tanner: Here’s Looking at You

We need Tanner’s work now. At this moment—now more than ever—we need to collectively embrace art as celebration; glamour as resistance; desire, allure and romance as defiance.

Tanner’s work is about looking. Deeply. In the eyes. Seeing inside to the core of deep vulnerability in each of us. It’s also about being ravaged by beauty. Even in this #MeToo moment, it continues to be easy to dismiss the feminine in art, the embellishments that dazzle, and the extravagance that meets the eye within the wild beauty of Chris Tanner’s over-the-top work.

While this career survey is about paintings and drawings created over the last decade, it comes out of a remarkable personal story that starts with his mother Sally Tanner—“a tough broad,” Tanner says. As an assemblywoman in Southern California, she helped write the Lemon Law and lived with her partner Patricia Hofstetter, a municipal court judge. These two larger-than-life women shaped Tanner’s character, informing his work.

The exhibition includes four series of works—each with its own inspiration—that emphasize ornamental, visually-luxuriant design. Intensely huge eyes; dreamlike metaphors glittery, embroidered, and bejeweled; and the value of visual pleasure, pattern, and decoration are apparent in his work. Freed from the constraints of the prevailing historical legacy of minimalism and conceptual art, and indebted to liberation politics—particularly feminism and queer culture—his work is celebrated as “fierce and resplendent” by artist Robert Kushner in his essay for the show’s catalog.

Three huge tactile paintings of peacocks are rendered in rhinestones, crystals, old German paste, seed beads, shelf paper, glass, tiger’s eye, polyester glitter, shells, and acrylic paint. Kushner connects the visual metaphor of peacocks that intersects both their lives by describing Mughai emperor and aesthete Shah Jahan’s Peacock Throne. It took six years to complete, cost more than the Taj Mahal, and was described by 17th century contemporaries as “a peacock with elevated tail made of blue sapphires and other colored stones, the body being of gold inlaid with precious stones, and having a large ruby in front of the breast, from whence hangs a pear-shaped pearl of 50 carats.” Hello, Chris, we all know you were there, says Kushner.

The mythology of the peacock runs deep: James McNeill Whistler’s Peacock Room (1876), now installed in the Freer Gallery of Art…the belief in ancient Greece that the flesh of peafowl did not decay after death, rendering it a symbol of immortality…the childhood memory of color TV and the significance of the ubiquitous NBC logo…“the peacocks [that] sometimes roamed wild in the San Gabriel Valley suburbs of your and my childhood, their piercing screams loud enough to wake you out of slumber,” as Kushner puts it. Tanner’s peacocks embody the mysterious strength of this bird and make it manifest in time and space.

Tanner uses glamour to blur the lines between high and low, art and decoration, object and idea. The emotion in Tanner’s paintings can be appreciated in four heavily embroidered, beaded, mirrored, and bejeweled canvases the artist describes as “Mae West meets Mary Todd Lincoln.” For him, these paintings are about positive and negative poles of power and vulnerability. The hair embellishment in one is a memory of his father’s shame at wearing a toupee; the blue in another is the camp fantasy of Maria Montez, her jeweled hand in a pool of water; and pink saturates a painting made to evoke burlesque and gay life of the 1950s. Tanner is also a well-known and acclaimed performer and in the final painting of the series, he pays homage to the woman he has “always wanted to play on stage—the big crazy fag hag” Mary Todd Lincoln.

In a series of intimate, mostly black and white nudes drawn from life, Tanner explores a tension between the artist and his subjects’ vulnerability. Categorically explicit, in these intimate drawings he reduces his imagery to line and feeling—discarding embellishment to honor the sitter’s unashamed sexuality.

Also included in the exhibition are a series of drawings on wallpaper—mostly military, and Hawaiian from the 40s—featuring huge eyelashes, big red lips, and accoutrements that read like kooky, two-dimensional drag.

His appropriation of everything shimmery reminds us about the surface thrill-shrill shallowness of empty promises and things bling. But we can dance. Wear perfume to cover the stink. His extreme embellishments and décor-defused accoutrements expose the blur of grotesque quick-change artists. He is really saying what matters is the love within, rather than without. —Karen Finley 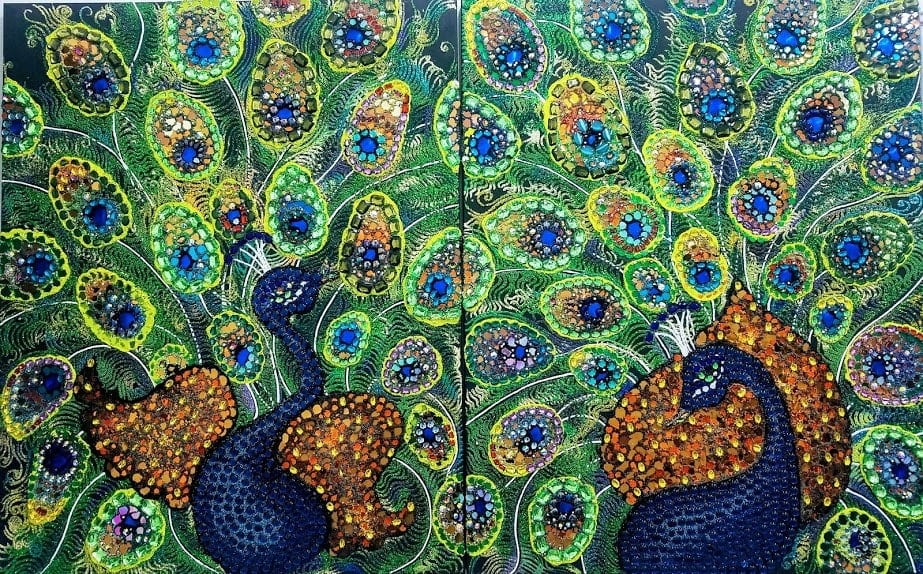 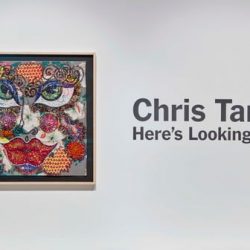 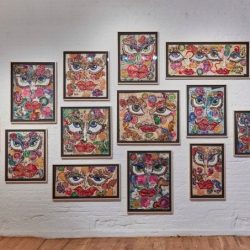 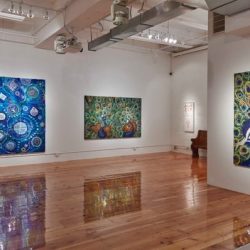 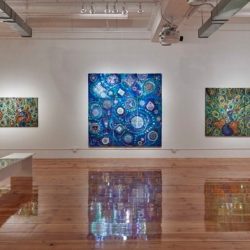 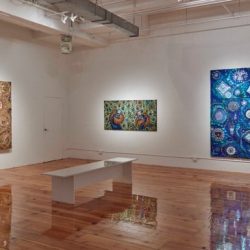 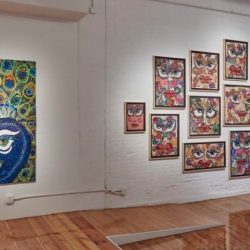 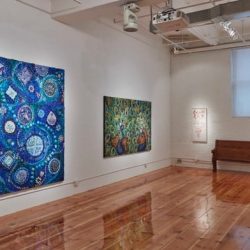 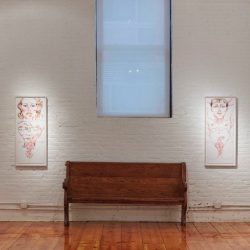 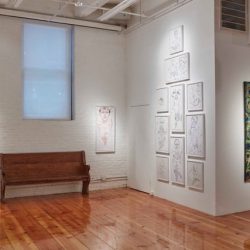 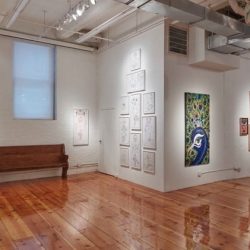 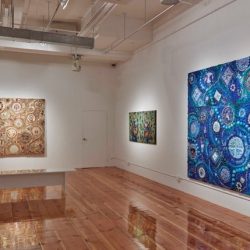 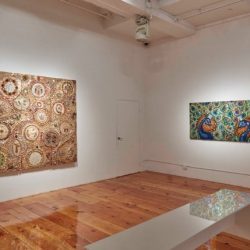 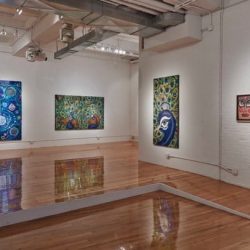 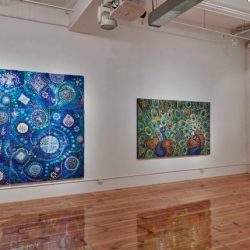