Poet Anne Waldman needs no introduction. We consider her part of the Howl family and are more than pleased to help celebrate the launch of her new book, Mundo Aparte/Offworld, a bilingual Spanish/English collection of poems, co-published by Pinsapo and Sonámbulos Ediciones.

The evening begins with the screening of Crepuscular, a cinema-poem collaboration by No Land and Waldman, envisioned for Anne’s poem of the same name which appears in her book Trickster Feminism. Narrated by Waldman, the film invokes archetypes of trickster poets whose sleight of hand can turn night to day—characters who ripple time with their instruments and mutability practices, states of precipice, and more. Crepuscular features sound by Joanna Mattrey and Ambrose Bye. The film premiered at Saint Mark’s Poetry Project in 2018.

Waldman is joined for a music-text hybrid reading of the poems with multi-instrumentalists and master improvisers Devin Brahja Waldman, Janice Lowe, and James Brandon Lewis. Poet, translator, and scholar Mónica de la Torre will read the poems in Spanish.

Offworld / Mundo Aparte is translated by Mariano Antolín Rato, edited by Öykü Tekten, with an introduction by Ammiel Alcalay. In his introduction, Alcalay says: “As the inheritor of so many rich examples and approaches to form and the worlds form enacts—from Pound, Williams, Reznikoff, and Olson, to Gertrude Stein, H.D., Robert Duncan, Diane di Prima, Amiri Baraka, and so many others, Waldman’s work, no matter its length, retains a scope commensurate to its intent, the intent being to record, to leave a record, to declare the intensity of a life, and propose going out on a very far limb, so that others might come along, even part of the way.”

Anne Waldman is a poet, performer, professor, editor, literary arts curator, and cultural activist. She is the author of numerous collections of poetry, including the feminist epic The Iovis Trilogy: Colors in the Mechanism of Concealment (Coffee House 2011), winner of the 2012 PEN Center USA Award for Poetry. She co-founded the Naropa University’s Jack Kerouac School of Disembodied Poetics Summer Writing Program with Allen Ginsberg and Diane di Prima, which she continues to curate in the summers, with an upcoming session titled “Sanctuary & Apocalypse” (for more information email SWP@naropa.edu). She has two forthcoming records: Sciamachy, produced by Fast Speaking Music and the Levy-Gorvy Gallery, and Poetry by Anne Waldman, produced by Devin Brahja Waldman with Guro Moe, Laurie Anderson, Deb Googe, William Parker and Ambrose Bye, cover art by Pat Steir. 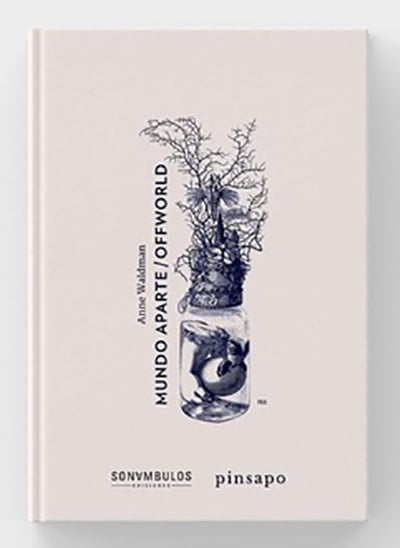