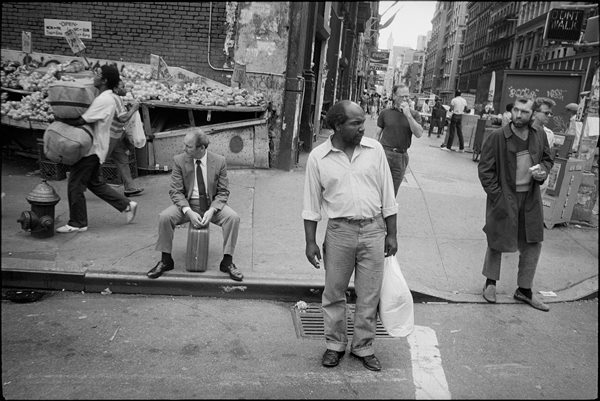 DeCapite, Barron, and Blagg are all connoisseurs of the street. This evening is about the pleasures of strolling around New York City, observing the present moment—immersing in the pure euphoria of that action. Writers DeCapite and Blagg both describe themselves as flaneurs, a literary type first identified in 19th century France implying an urban explorer. DeCapite and Blagg describe exactly what’s in front of them, yet they’re also aware of how the city interacts with memory and imagination—an interaction that is activated by the ecstasy of keen observation. Photographer Ted Barron is “a thief of the imagination,” able to transmit a timeless moment that needs no narrative yet tells a powerful story. This evening will be the second in a series. The third installment of the Sparkle Street Social & Athletic Club will take place on June 12, and will feature Mike DeCapite, Ted Barron, Vincent Katz, and Luc Sante.

I climb out on the fire escape . . . I know I’m supposed to have something to say, but I’m happiest when I’m just a recording device. I don’t have anything to say. I write from an impulse to catalog. The frustration of not being a visual artist, I guess. It’s exhausting that everything should mean something. The human curse. I can tell myself I’m just out harvesting details, but something in me needs to arrange them so they mean something.
—Mike DeCapite, from “April Morning Fire Escape”

Join Howl! on Wednesday, May 11th at 7pm for this free event with readings by Mike DeCapite and Max Blagg, and short films by Ted Barron.