Art worlds were often rooted in a distinctive milieu, and artworks generated in Montmartre pre-World War I, say, or London’s Chelsea post-World War II, are more likely to clue you in to the time and place of their making than the art produced nowadays, which has become a global industry. Antony Zito’s art does just that—though the Where and the When are the Lower East Side, not yet gentrified into the East Village. True, that was the LES of not so long ago, but being pulled back into what was until recently richly alive can trigger emotions at least as intense as more history-sheathed art. As here.

Zito grew up in Connecticut. “Everyone in my family was an artist and craftsperson,” he says. He made his way to the East Village in the early 90s and set up as a portrait painter. He was in his early 20s and times were tough. “I couldn’t afford to go buy canvas so I just started picking up things on the street to paint on,” he says. “I found a lot of cabinet doors, panels, ironing boards, mirrors, and frames…things that worked very well as surfaces.” 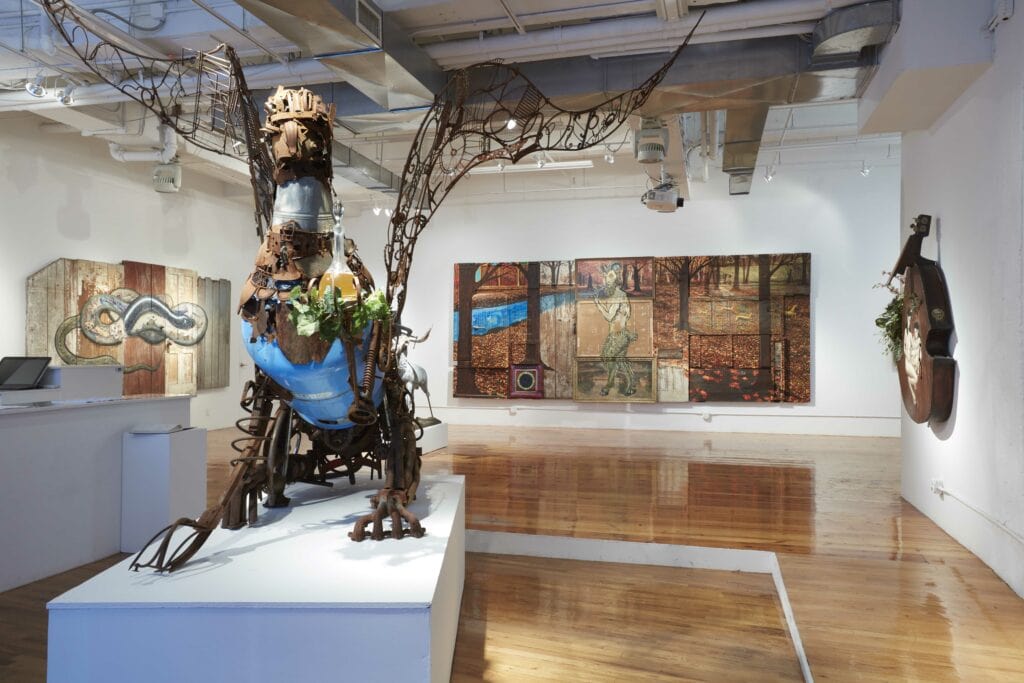 So what had begun as an expedient quickly became part of Zito’s tool kit. “I call these things artifacts of recent history,” he says. “They have their own narrative to them. And they carry an energy in their patina that is very vital. They just add layers to the narrative that sort of interweave with the paint.”

Things went well, and Zito decided to set up a gallery. He found a space on Ludlow Street in the immediate aftermath of 9/11, which was, of course, just when many were getting the hell out of downtown.

“I knew that was the right time to do it,” he says. “Because all the rents were going down. And New York isn’t going anywhere. I thought all the people who were running away were crazy. And spineless.”

At Zito Studio Gallery he focused on portraiture. Zito has a double-bladed gift for this, being not merely able to catch somebody’s likeness in oil, acrylic, collage, whatever, but to make that somebody seem of interest, even when you have no idea who they are. “I asked my friends to sit,” he says. “And a lot of the time people would just come in off the streets. Either they would be neighborhood people or curious folks. I would ask them to sit down for a painting. And I also used the small storefront space to show my work, alongside the work of my friends. So I had a different show every month.”

Zito had also begun picking up commissions, among them from Jim Jarmusch, who included his work in the film Broken Flowers, and commissioned a painting of Lee Marvin for Coffee and Cigarettes. Another commission, this to do a sequence of portraits for Clayton Patterson’s LES-oriented Acker Awards, launched Zito onto a quest. “I started thinking what is a cheap piece of junk that screams New York?” he says. “And it was the blue and white Greek-diner cup that you just see crushed and soiled on every corner. It just speaks of the movement of New Yorkers at the pace of light, just throwing these things away and buzzing on with their lives. I love the activity of a paper coffee cup, and how it is so disregarded and discarded.”

The portraits are of just who? Well, I spotted Quentin Crisp, Joey Ramone, Taylor Mead, and Allen Ginsberg, but some deserving names were missing, I felt. Has he done Penny Arcade? “No, I’ve only done people on the coffee cups who have passed on,” Zito says. “It’s basically a post-mortem project. Clayton will every year give me a list. I believe in it, and I want to get behind it.”

Steeply rising rents, that not-so-golden oldie, caused Zito to close his gallery in September 2006, an event memorialized by a costume party which he called One Last Anti-Gentrification Freak Out, and which was visited by the police and the fire department three times. He is now back in Connecticut, living on a farm and working out of a studio in Hartford.

Which has clearly not slowed the artist down. In 2008 he appeared in 4heads, a non-profit fair involving 120 artists in Governors Island; in Portal, another alternative art fair, in 2016; and in February 2018, he put together a project making silhouettes in the Wyckoff House Museum, a 17th century building, the oldest in Brooklyn. Paintings in this show included The Threshold, a 19-footer, a recent painting which shows a satyr beckoning gallerygoers to a promised land that has been put together from found objects, including several ornate picture frames and a door. I noted that Jim Jarmusch had referred to Zito admiringly, not as a diss, as “an artisan.”

“That was his wording,” Zito says. “But I don’t think it’s inappropriate. I’ve known a lot of people who are snobbish about it, and who think it is beneath me to work for hire. But a lot of people end up taking day jobs that they hate. I’m happy doing art for a living. I’m a portrait painter for hire. I do quite a bit of commercial work. I paint murals. And I make my own art.”