In celebration of Pride 2020, Vangeline Theater/New York Butoh Institute in collaboration with Howl Arts is pleased to present Queer Butoh 2020 (VIRTUAL). This year, we are pleased to present the works of Mee Ae, Dustin Maxwell, Davey Mitchell and Scoop Slone on Howl TV. Queer Butoh is dedicated to the memory of Brian Butterick aka Hattie Hathaway. Queer Butoh continues June 23–28 on vimeo.com/vangeline and howlarts.org.

At its origin, the introduction of Butoh in Japan was widely controversial. The first homoerotic butoh performance, Kinjiki (Forbidden Colors), created by Tatsumi Hijikata in 1958, caused controversy amongst its spectators.

“Butoh is essentially the dance of the marginalized, and the LGBTQ population is still largely marginalized in the world,” says Vangeline, curator of this series. “This year, despite obvious challenges, it is particularly important to find ways to celebrate our LGBTQ artists for the 50th-anniversary celebration of Pride.”

Swoon sprung from feelings of desire woven through with shame, as is so often the case due to internalized feelings of wrongness for my attraction to women. By expressing through movement what feels so inexpressible otherwise, these feelings were transmuted into the purifying core desire I have for dance. As a result, this piece came to represent a commitment ceremony of sorts between dance and I. —Mee Ae

Mee Ae is a Butoh-inspired dancer and choreographer. She graduated from Bard College in 2000 with a BA in Drama and Dance, and landed in New York City in 2001, whereupon she was awarded a full scholarship to study at Peridance Capezio Center. In 2004 she began her training in Butoh with Vangeline, and her performance career with Vangeline Theater. Since then, she has performed throughout Europe, Canada, and the United States with Big Art Group, Desert Sin, Proto-type Theater, Caravan Stage Company, Jenni Hong Dance, Abigail Levine, Malinda Allen, Insect Ark, Theo Kogan, Mike Gordon, Jamie Lidell, Rob Roth, Timothy Saccenti, Lee Walton, and Yael Kanarek.

The dancer and choreographer currently lives in Ithaca, New York, and has been the recipient of several awards from Community Arts Partnership including the Artist in Community Grant, Strategic Opportunity Stipend, and the Fellowship for Artists. Her work focuses on utilizing dance as an engine to empower and bring visibility to marginalized communities, through events such as The Arts & Mental Health, Queer Butoh, Ivy Q, We Step into the Light, Dancing for Life, Go Go Go Variety Show, and One Out of Seven.

Dustin Maxwell’s multipart and multimedia work, in a dark forest partly illuminated, is a recognition and exposition of the Shadow (all that is rejected) and the Sacred that hide in plain sight. The film component of the work, dark forest: portal, represents an inlet on the wellspring of materiality. It is a mesmerizing invitation to dive below the surface and to be with the whole.

Dustin Maxwell is a movement-based visual artist currently living in New York City. He was born queer into a Mormon family of eight in Albuquerque, New Mexico, where he took his first ballet class at the age of three. As a teenager he studied modern dance and Barbara Clark’s somatic approach with his teacher, Joanne Emmons. In 2005 he relocated to Minneapolis, where he spent a decade studying dance and performing locally and internationally. He began studying Butoh with Gadu Doushin in early 2012. His work is sourced from ritual and sensitizing practices and aims to preserve those elements within “finished” works. Otherness, sexuality, spirituality, death, and the magic of being are themes central to his art and life. His dances and performance installations have been presented in theaters, galleries, basements, alleyways and countrysides in Minnesota, New York, and Germany. He holds a BA in Dance from the University of Minnesota, Twin Cities. He is a 2019 Jerome Hill Artist Fellow and was nominated for a 2015 SAGE Award for Outstanding Performer.

DAVEY MITCHELL in Diary of a Mad Swan

“There is no place like HOME”, is the phrase that comes to mind when I think of Butoh.  “Home” in the sense of finding one’s self – completeness of being; and within that being is your journey – your life experiences – struggles and accomplishments, happiness, and sorrow.  As a mature dancer, Butoh has graciously accepted me with all the baggage that I carry from my journey and has allowed me to spill my guts of grief to orgasmic glories. It has taught me the power of stillness and given me a voice of balance where my masculine and feminine energies can speak my truth!.” —Davey Mitchell

An expressionist of the arts in New York City for over 30 years, Davey began his dance training at the Alvin Ailey Dance School in the 1980s. Through the span of his dance career with various dance companies, highlights include performances at the Brooklyn Academy of Music,  The Duke Theater, PS. 122, The Riverside Church and Adelphi University to name a few.  Now as a solo performer, he continues to showcase his work as a guest artist in collaboration with choreographers and special events. For more info www.artbydavey.com

A being exists alone in the primal future past. Through Its locality It pieces together memories of Its forgotten identity in a reclamation of Its Self. —Scoop Slone

Scoop began an artistic career singing for Portland Opera and switched personas, jumping into the New York City rock-opera scene. Praised by the New York Times for “gamely vocal stylings,” Scoop becomes known for vocal and character morphing in all genres of media and theatrical performance. An introduction to Butoh in 2018, coupled with costume and object fabrication, commenced a new artistic trajectory in Scoop’s artistic process and the public personification of Geometrica 222. In July 2019, HERE Arts debuted Future Perfect with Scoop’s first Butoh performance exhibit and installation. Fragments is the second incarnation of that work in progress. 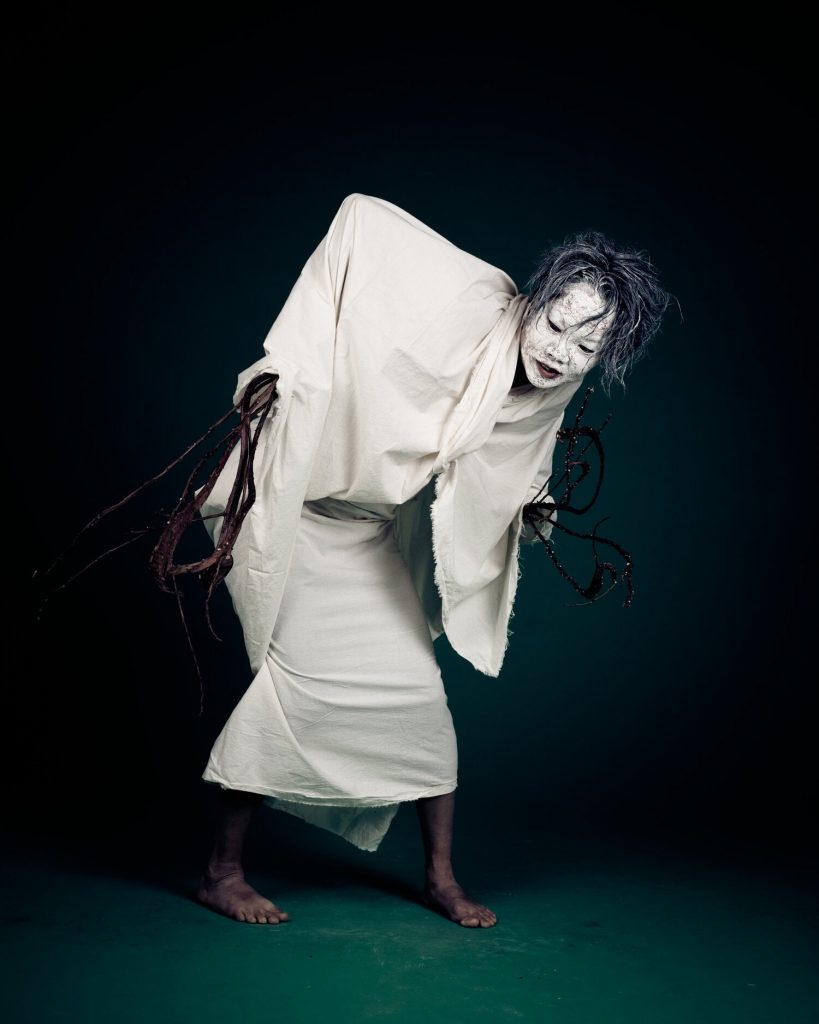