Spend your lunch break with the lunatic fringe! Outside, on the sidewalk, in front of Howl! Happening, experience the nutty wonderment that was the essence of Tom Murrin, our beloved Alien Comic. The Inimitable Camelita Tropicana performs. Tropicana (a.k.a. Alina Troyano) is a performance artist, playwright, and actor. Troyano burst on New York’s downtown performing arts scene in the eighties with her alter ego, the spitfire Carmelita Tropicana and her counterpart, the irresistible archetypal Latin macho Pingalito Betancourt, followed by performances as Hernando Cortez’s horse and la Cucaracha Martina from her childhood fairy tales in Cuba. In Tropicana’s work humor and fantasy become subversive tools to rewrite history. About Carmelina Tropicana.

Following the performance, we’ll be screening Uzi Parnes short film, World Peace, (1987) starring Tom as Claude Balls a philandering East Village performer who gets his just rewards when he hooks up with three beautiful women after his show.

Uzi Parnes is a New York based filmmaker, photographer and actor. His photographs, video and live-film performances have been shown worldwide—most recently as part of Recycling Atlantis at 80WSE Gallery, NY (2014) and in a career survey at The Arsenal Institute for Film and Video Art, Berlin (2012).  His installation “Basra On First Avenue” at Broadway Windows, NY (10/14-2/15) was named one of the best artworks of 2014 by noted critic David Ebony.  More about Parnes

And there is more: For the astrologically challenged, next month’s full scale, full moon performance madness is coming Sunday, May 22nd at 4 PM and features the presentation of Dixon Place’s 2016 Tom Murrin Performance Award, also known as The Tommy.

Performance is anything done with purpose and style—Tom Murrin

Howl! Happening houses the archive of Tom Murrin that comprises masks, costumes, scripts, correspondence, photographs, and tapes of performances going back to the early 70s. Murrin, aka the Alien Comic, is known as the Godfather of Performance Art. Every full moon, Tom performed his Full Moon Show in honor of his moon goddess, Luna Macaroona. When he had a club date that fell on the full moon, he’d wrangle his friends to perform as his guests—pushing the careers of such groundbreaking performers as David Cale, David Sedaris, Amy Sedaris, Blue Man Group, Ethyl Eichelberger, Lisa Kron and many others. When he didn’t have a club date, he performed on the street for passersby, transforming the pedestrian atmosphere with his madness and magic. Howl! Happening’s monthly series continues that tradition, with performances in the gallery and surprise pop up performances on the street. 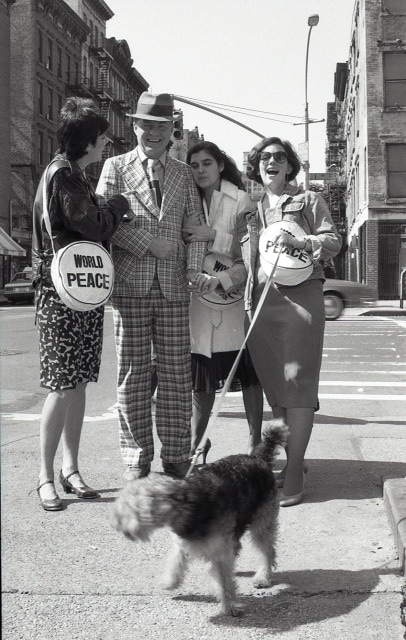