A Wolf Inside:
Natives, Nuyoricans, and the Beats

A Wolf Inside:
Natives, Nuyoricans, and the Beats

A film by Sandra Hale Schulman and Damian Rojo

Howl! Happening is pleased to present the world premiere screening of A Wolf Inside: Natives, Nuyoricans, and the Beats, a documentary film by Sandra Hale Schulman and Damian Rojo featuring the Native American poet Diane Burns, Joy Harjo, Allen Ginsberg, Bob Holman, Pedro Pietri. A panel discussion with poets Bob Holman of Bowery Poetry and Chavisa Woods, executive director of A Gathering of the Tribes follows the screening.

In the mid-1980s, Native poet Diane Burns, whose searing words cut through the noise of the Santa Fe reservations and New York City’s Lower East Side, took a once in a lifetime trip to Nicaragua with the Father of the Beats, Allen Ginsberg.

Organized by Bob Holman of the Bowery Poetry, a group of indigenous poets joined them, including future Poet Laureate of the U.S. Joy Harjo, and Nuyorican Poets Café member Pedro Pietri.

Deep in the heart of the jungle, it was a rollicking event filled with love, poetry, revolution, and the search for identity in a time of radical changes in the Americas.

Burns (Chemehuevi and Anishinabe) is currently featured in Greater New York at MoMA PS1. “A 1989 video of poet Diane Burns reciting a punk poem on the Lower East Side crackles with humor around Indigenous politics, gentrification and displacement” says Marth Schwendener in her New York Times review of the show. Stills from the film debuted in the exhibit.

A Gathering of the Tribes, the poetry salon Burns was an original member of, is currently featured in the Whitney Biennial “Quiet as its Kept.”

As understanding of Native Americans in the arts deepens, and the legacy of the Beat Poets is celebrated, this archival documentary tells the story of what happened when those cultures clashed and sparked a revolution with poetry at its center.

Sandra Hale Schulman is an author of four books, has contributed to shows at the Museum of Modern Art, Smithsonian’s National Museum of the American Indian, The Grammy Museum, The Queens Museum, and has produced four films on Native musicians. Her work has appeared in Billboard, Variety, Rolling Stone, The New York Daily News, and Entertainment Weekly. She appears regularly on PBS Indian Country Today Newscast. 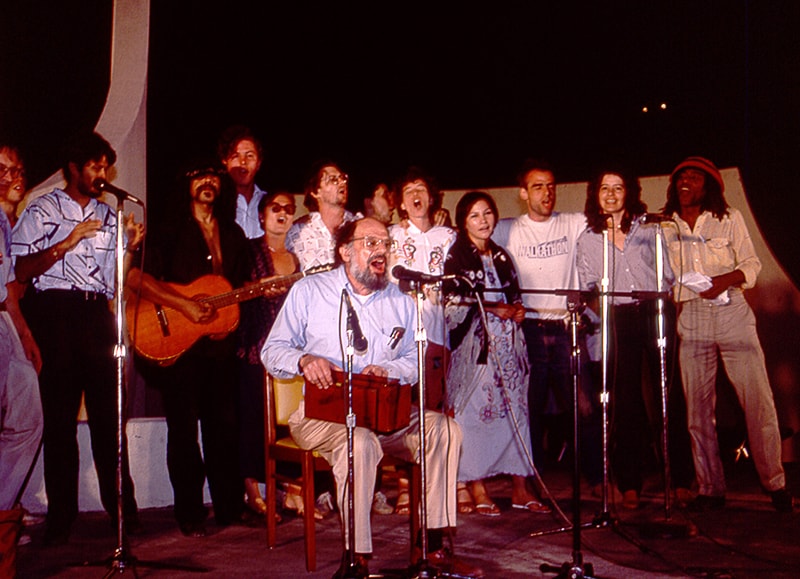