“Tabboo!’s portraits have an arresting honesty.“

Howl! Happening is pleased to present a series of new paintings by Tabboo!—a creative force in the Downtown/East Village/Alphabet City worlds of art, performance, and nightclubs for close to 35 years. Well known as a painter, Tabboo!’s subjects have ranged from still lifes to cityscapes—and he is renowned for his portraits. On view will be 14 portraits of Tabboo’s closest friends, giving these new works an immediacy and potent emotional charge.

The portraits’ expressionist tone and vibrancy are embued with the innermost thoughts and personality of both the artist and the sitters. In these portraits of his friends, we see Tabboo!’s own exuberant personality and his close, personal relationship to his subjects. The portraits capture his intimates with a fresh, emphathetic eye, expressing their essential personality and the psychic depth beneath the painted surface of the linen. Poignant and loving, they are a record of a cross-section of his friends—some well known in the downtown scene, others just part of his tribe—and also a tribute to the creativity and continuum of culture that is alive and thriving—right here, right now!

Tabboo!’s portraits recall the style of Alice Neel and Diane Arbus . . . Similar to Arbus, there is a poignancy to Tabboo!’s portrayal of his subjects. They are shown alone and isolated in empty space. They connect directly to the viewer. Like Alice Neel, Tabboo! foreshortens arms, he adds vernacular details, he brings out the warmth and domesticity of the setting, and the networks of friendships.
—Rupert Goldsworthy, Tabboo! catalog essay

Loaded with symbolism and emotive brushwork, these portraits bring out magical details of the sitters’ inner and outer lives. The paintings vibrate with an uncanny life force. Clearly Tabboo! knows these people well!

Alongside Mark Morrisroe, Nan Goldin and Jack Pierson, Tabboo! was a member of the so-called Boston School. Arriving at the wide open creative arena of the East Village in the 80s, Tabboo!’s work is a riotous mixture of DIY energy and high camp. He has collaborated with countless artists, musicians, writers, and performers and his distinctive style has had a profound impact on leading cultural figures of his generation.

Prolific in a way that borders on compulsivity, [Tabboo!] was not only one of the most imaginative figures in the early-’80s East Village art scene: he also illustrated our world, lending his hand to the cover art of era-defining records by the likes of Deee-Lite and Book of Love and producing a seemingly infinite array of flyers and ads for the most celebrated nightclubs of the day, like the Pyramid Club and Mudd Club. He was just as likely to be found inside those clubs, designing their interiors or commanding the stage as Tabboo! Of all that, [Tabboo!] simply says, ‘I worked in nightclubs when nightlife actually mattered.’
—Carlo McCormick, Paper magazine, 2013

Tabboo! continues to make his mark. He recently expanded his artistic range in a collaboration with Marc Jacobs on a collection featuring his signature work. Tabboo! and the collection have been featured in an article by Tama Janowitz in August’s Harpers Bazaar and will also be featured in Le Monde in September. His work will be included in the Museum of Modern Art’s upcoming exhibition about the legendary Club 57 and his book Tabboo! was published by Damiani on the occasion of his major exhibition at Participant, Inc. (New York). He has also had major shows at the University of Nevada, Reno; AMP Market, Provincetown; Vox Populi, Philadelphia; Gallery Mitterand, Paris; Gavlak Gallery, Los Angeles; and The Museum of Santiago de Compostela, Spain.

“The great thing about being an artist is the freedom to be myself,” he says.

A fully illustrated catalog with texts by Rupert Goldsworthy, Brandon Olson, and others accompanies the show.

Video of Tabboo! talking about his artistic process here. 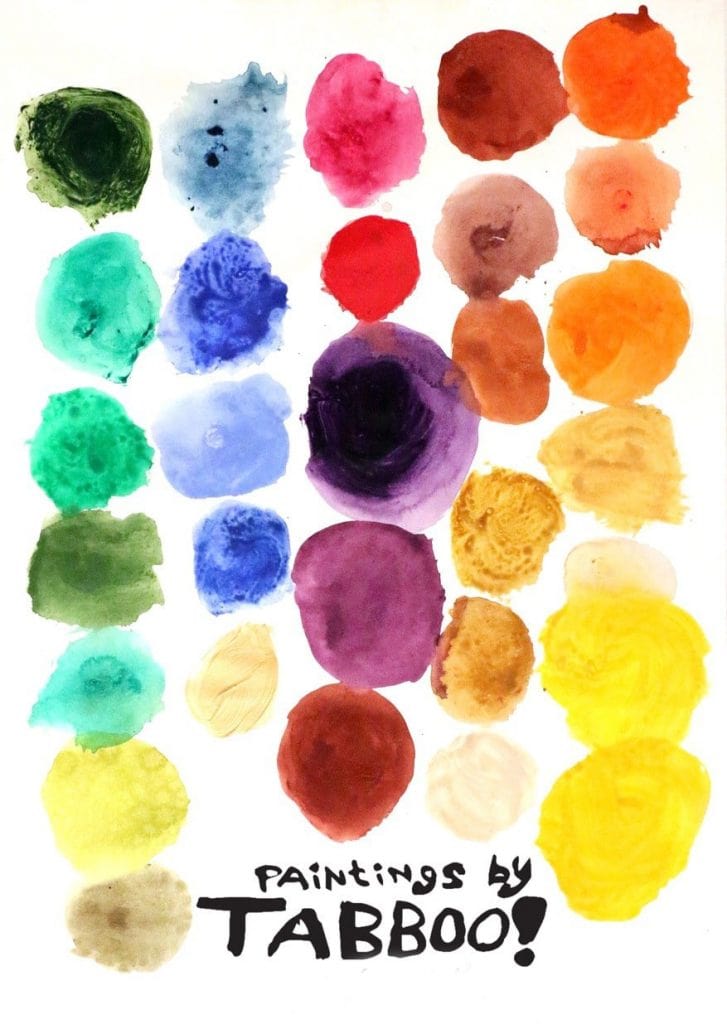