Scooter LaForge How to Create a Monsterpiece

Scooter LaForge How to Create a Monsterpiece

We all have a core of innocence, battered and buried. I don’t mean immunity to guilt and shame, but the capacity to be endlessly surprised by the specificity of everything . . .

Howl! Happening presents How to Create a Monsterpiece, an exhibition of new work by Scooter LaForge. Shocking and playful and messy and scary, his paintings and three-dimensional objects are madly over the top: anarchic yet composed, pretty yet provocative, they embody recreational pleasure, artistic discernment, and the enjoyment of PLAY.

After leaving the small town in New Mexico where he grew up, LaForge received a painting degree at the University of Arizona and then moved to San Francisco, where he polished his painting technique. He won a fellowship to Cooper Union and moved to New York, and it was here that he rediscovered his voice in the pop-culture and cartoon worlds of his childhood. Twenty years later, he says, “I am doing what I was doing when I was nine or ten years old.”

With this exhibition, LaForge comes full circle as a mature artist. His innocence and ability to be endlessly surprised are apparent in works that break down the barriers between sculpture and painting. LaForge, whose work is described by the Saatchi Collection as “Golden Books on acid,” cites Robert Rauschenberg’s combines and Claes Oldenberg’s sculpture as major influences. The works in this show incorporate presents that strangers send from around the world with a mash-up of urban detritus found on the streets of New York City. Everything is fodder for his playfulness and innovation. Combining painting with a mind-boggling array of nontraditional materials and chance objects like old brooms, dolls’ heads, pins, fabric, old clothing, teddy bears and other stuffed animals, bags of junk jewelry even a badminton net he found on the street, La Forge repurposes these humble gifts.

Rauschenberg says of his intention in the combines: “I wanted to use the surprise and the collectiveness and the generosity of finding surprises. And if it wasn’t a surprise at first, by the time I got through with it, it was.”

With a nod to pop art, an expressionist painterly eye, and the exuberance of pattern and decoration, LaForge peppers his work with iconic cartoon characters, both well-known and from his wildly fertile imagination: “My heroes are Popeye, SpongeBob SquarePants, witches and monsters, cats, bunnies, bears, owls, and birds,” he says.

Also on view are new large paintings’ psychological landscapes that are less about how they look than about how they make the viewer feel. Painted with reckless abandon, they combine the influences at play in his life and art play that produces beauty.

“Scooter LaForge is acutely aware of his antecedents: Joyce Pensato, George Condo, Phillip Guston, Fellini’s clowns, Ringling Bros, Emmet Kelly, Picasso, and German expressionism,” says Happening Gallery director Ted Riederer in his essay, “and while this true, Scooter is completely of this era, a time of gentrification, art fairs, and the economic paradox where a high-end boutique stands next to a welfare hotel on a street notorious the world over as Skid Row.”

The arts are a great little laboratory, of absolutely free play of ideas and emotions which normal social space can’t cope with: you can play war and nobody dies, and play love and nobody has their heart broken. 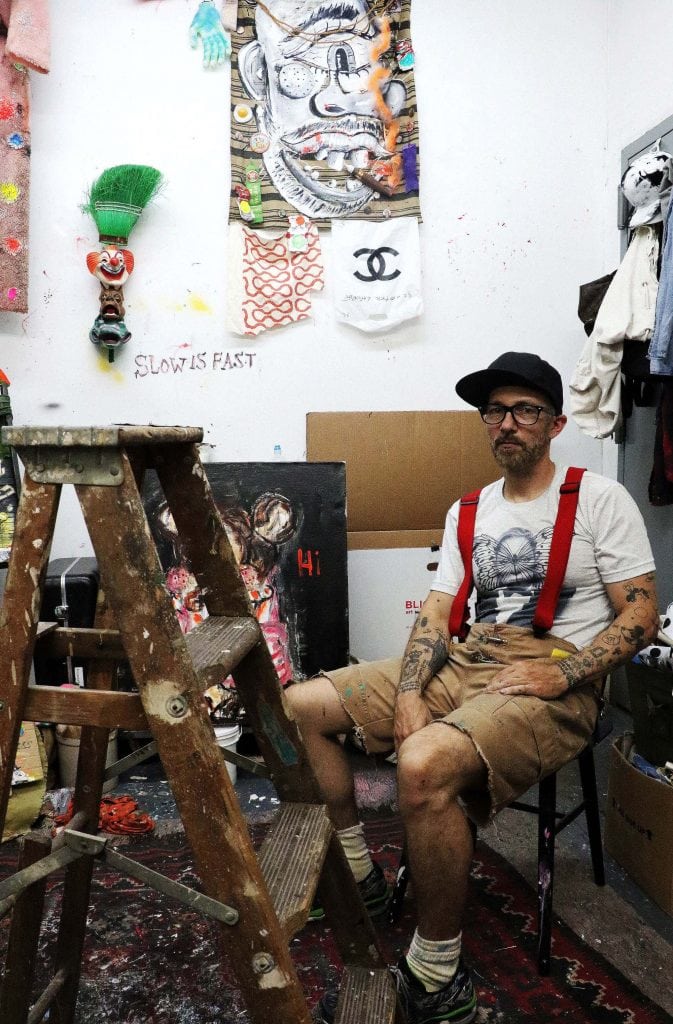 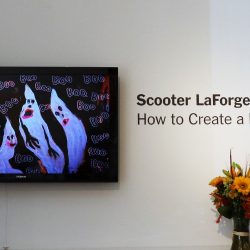 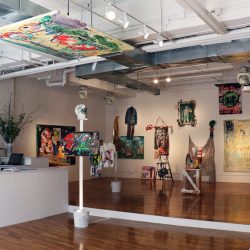 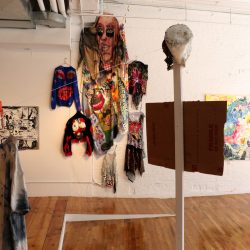 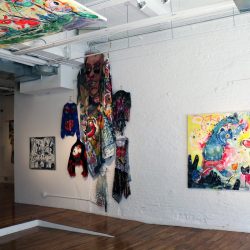 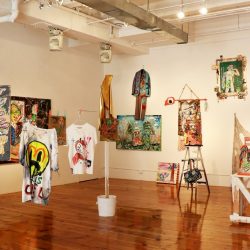 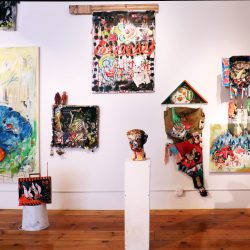